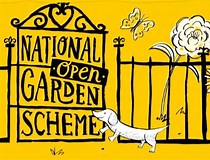 A garden for the future with a link to the past

It had been planned to open the garden in July 2020 for the first time for the NGS to raise funds for nursing charities. The CV19 pandemic meant this was not possible.  However, like many other gardens, we organised a virtual tour of the garden.

We were delighted that the Mayor and Mayoress of Reading (Cllr David Stevens and Mrs Stevens) visited the garden in July to launch the virtual tour.  They used to live in the nearby streets and the garden was a total surprise to them.

The video may be seen HERE

If you enjoy your tour please consider making a donation to the NGS Nursing Charities.  We plan to open on 4 July 2021.

During the tour the trustees explain about the house and garden, the planned changes and why they like the house and the garden.  A landscape gardener and neighbour talks about pruning the box parterre and dealing with the threat of box moth.

During the tour the sound of traffic (even in the middle of the lockdown), construction work and ambulance sirens intermingle with shots of the garden, the trustees explanations, gentle birdsong and a persistent crow. This just highlights the position of the garden in bustling Reading.

History of the Garden at the Rear of the House

When the house was built in the 1660s it would have had a garden of the period.  A map from the 1722 shows that the garden had a cruciform shape.

This was still evident in a survey from 1877 and in 1944 the quadrant paths could be seen in aerial photographs.

The aerial map 1944 with the garden in the centre showing the cruciform shape.

The house, and the gardens, have had many uses including between 1877 and 1927 as the first home for Kendrick Girls. Kendrick School, children are shown in the garden in postcard from 1895.It was was used for country dancing when the WI was here. In 1951 the Berkshire Federation of Women’s Institute undertook a restoration of the garden as their Festival of Britain Project.

However by around 2010 the garden had become little more than muddy car park. Something had to be done.

One of our Trustees, Clive Williams OBE was the executor of the Late Geoff Hill, a former Gurkha Officer.

Clive persuaded his fellow executors that a grant to the house to enable the garden restoration would have been something Geoff would have loved.  This was agreed and it was decided to call the garden after him, thus the Geoff Hill Memorial Garden.

Using archival research, the Watlington House Trust led by Trustee and garden designer Gaila Adair worked to bring the garden back to life. Borrowing from the past to create a garden fit for purpose in the 21st century we have transformed the rather uninspiring car park into a peaceful space for workers at the house, the community and for visitors.  Trustees worked closely with the Berkshire Gardens Trust developing the design for the garden. Work on the design started in 2012.

The Knott Garden / parterre around 2016

It was decided that the restoration should reflect the William and Mary period of the house. The design of the parterre was based on the Watlington coat of arms

The quadrant design with linking paths, similar to Oxford Physic garden, was evident through using research, aerial photos and old surveys. Samuel Watlington’s uncle, John Watlington, was an apothecary who taught Elias Ashmole who influenced the design of the Oxford Physic.

As Gaila says “Many plants chosen for the garden are herbs or cultivars of herbs. This gives a visual link to the apothecary heritage of the Watlington family. Many gardens of the William and Mary genre would have also been fruit producing, hence the pear espaliers, vines, quince and apple half standards. Augmented with tulips, agapanthus and irises this give all year round colour.   The panel of pleached hornbeam provides symmetry and screening of the garden hall and allows light to flood between them to the quadrant seating areas.  The box hedging and clipped yew spires give further formality and acts as full stops to each quadrant. The overall effect is a year round clock of production, a visual timepiece of Watlington House.”

The Garden Design around 2013

The restored garden was opened in Summer 2015. As may be seen from the images of the garden below by July 2020 it had matured well. It was time to open it for the public under the National Garden Scheme.